The National Senior Pro Rodeo Association’s (NSPRA) corporate headquarters is in Wickenburg, AZ, along with the NSPRA Hall of Fame Museum.

The NSPRA sanctions, or co-sanctions, approximately 60 rodeos within the US and Canada.  The only requirement to be a NSPRA member is you must be at least 40 years old during the current calendar year.

New members for all events are always welcome. =>Click Here To Apply<=

A rider is disqualified if he touches his equipment, himself or the animal with his free hand. The rider is judged on his control during the ride and on his spurring technique. The score also is based on the rider's "exposure" to the strength of the horse. In addition, the horse's performance accounts for half the potential score.

Although barrel racing may look less nerve-wracking than some other Senior Pro Rodeo events, it certainly is not for the faint-hearted. The horsemanship skills and competitive drive in this fast and furious event make it a crowd favorite.

In barrel racing, the contestant enters the arena at full speed. As they start the pattern, the horse and rider trigger an electronic eye that starts the clock. Then the racer rides a cloverleaf pattern around three barrels positioned in the arena, and sprints back out of the arena, tripping the eye and stopping the clock as she leaves.

The contestant can touch or even move the barrels, but receives a five-second penalty for each barrel that is overturned. With the margin of victory measured in hundredths of seconds, knocking over one barrel may spell disaster for a barrel racing competitor. A barrel racer looks for a horse that is fast, supple and athletic to make those tight turns around the barrels without pausing or stopping.

Unlike the other rough stock contestants, bull riders are not required to spur. That's no surprise, as it's usually impressive enough just to remain seated for six seconds on an animal that may weigh more than a ton and is as quick as a cat.

Upper body control and strong legs are the main attributes, along with great balance, essential to riding bulls. The rider tries to remain forward, or "over his hand," at all times. Leaning back may cause him to be whipped forward when the bull bucks. That's a good way to lose a few teeth!

Judges watch for good body position and other factors, including use of the free arm, and for added points, spurring action. Although not required, this spurring of the bull will add points to a rider's score. As in all the riding events, half of the score in bull riding is determined by the contestant's performance and the other half is based on the animal's efforts.

A bull rider will be disqualified for touching the animal, himself or his equipment with his free hand.

Like bronc riding, tie down roping is an event that was born on the ranches of the Old West. Sick calves were roped and tied down for medical treatment. Success in tie down roping depends largely on the teamwork between a cowboy and his horse. The luck of the draw is also a factor. A calf that runs fast or kicks hard can foil a roper's finest effort.

After the calf is given a head start, horse and rider give chase. The contestant ropes the calf, then dismounts and runs to the animal. After catching and flanking the calf, the cowboy ties any three of the animal's legs together using a small rope called a "pigging string", which he carries in his teeth until needed.

When the cowboy completes his tie, he throws his hands in the air as a signal to the judge. He then remounts his horse and they take a step or two forward which allows the rope to become slack while the calf remains tied. The run is declared invalid if the calf kicks free within six seconds.

As with any timed event, a 10-second penalty is added if the tie down roper breaks the barrier at the beginning of the run.

Ribbon Roping is a sanctioned Senior Pro Rodeo roping event involving a team consisting of a cowboy and cowgirl.

The roper tosses a loop on the calf, while his partner, the ribbon runner waits in the arena. As soon as the roper dismounts from his horse and makes contact with the calf, the cowgirl runs to the calf and snatches the ribbon tied to the calf's tail.

The ribbon runner then races back to the finish line. This is a very popular event with rodeo fans. World Champions are crowned during the Senior National Finals Rodeo.

Rodeo's "Classic" event, saddle bronc riding, has roots that run deep in the history of the Old West. Ranch hands would often gather and compete among themselves to see who could display the best style while riding wild or unbroke horses. It was from this early competition that today's Saddle Bronc event was born.

Each rider must begin his ride with his feet over the bronc's shoulders to give the horse the advantage. A rider who adjusts and synchronizes his spurring action with the animal's bucking will receive a high score. Other factors that are considered in the scoring are the cowboy's control throughout the ride, the length of his spurring stroke and how hard the horse bucks.

Model spurring action begins with the rider's feet far forward on the bronc's point of shoulder, sweeping to the back of the saddle, or "cantle," as the horse bucks. The rider then quickly snaps his feet back to the horse's neck a split second before the animal's front feet hit the ground.

Disqualification results, if, prior to the six second buzzer , the rider touches the animal, himself or his equipment with his free hand. In addition, a DQ will occur if either foot slips out of a stirrup or if he drops the bronc rein.  If he fails to have his feet in the proper "mark out" position at the beginning of the ride, a 5 second penalty will be assessed (or a 10 second penalty if there is no mark out on either side).

Wrestling a steer requires more than just brute strength. The successful steer wrestler, or bulldogger, is strong, to be sure, but he also works on the principles of leverage. The steer wrestler, mounted on horseback, starts behind a barrier, and begins his chase after the steer has been given a head start. If the bulldogger leaves the box too soon and breaks the barrier, he receives a 10-second penalty.

The steer wrestler is assisted by a hazer, which is another cowboy on horseback who works from the other side of the steer to keep him running in a straight line. When the bulldogger's horse pulls even with the steer, he slides down the right side of the horse and reaches for the steer's horns.

After grabbing the horns, he digs his heels into the dirt. As the steer slows, the cowboy turns the animal, lifts up on its right horn and pushes down with his left hand in an effort to tip the steer over.

After the catch, the steer wrestler must either bring the steer to a stop or change the direction of the animal's body, before tipping the steer over, or he's disqualified. The clock stops when the steer is on his side with all four legs pointing the same direction. Many call this the big man's sport, but there are great Champions in Senior Pro Rodeo who don't tip the scales at more than 180 pounds, but have the strength and quickness to wrestle in steer in under 4 seconds.

(Heading) If a team roping header isn't quick with a rope, you won't find him at the Senior National Finals Rodeo. Headers must run on instinct and cat quick reflexes. To win money at most Senior Pro rodeos, team roping headers must leave the box and rope their steer in less time than it takes to open a bag of pretzels.

First, the header must race out of the box on horseback (without breaking the barrier), chase down a fast-running steer and rope him around his protected horns, neck or "half-head" (a partial horn-neck catch). Then the header must turn the steer to the left, giving his partner, called a heeler, a chance to slip his rope around the steer's hind feet.

The run is completed when the steer is secured and both team ropers' horses are facing each other on opposite sides of the steer. Team roping is, as the name implies, rodeo's only true team event.

(Heeling) - In rodeo's only true team event, two ropers, a "header" and a "heeler," work together to catch a steer. The header is the first cowboy out of the box. He may rope the steer around the head and one horn, around the neck or around both horns, which are specially wrapped for the event.

As with all timed events, if the header fails to give the steer a head start, a 10-second penalty is added to the total time.

Catching only one hind leg results in a five-second penalty. If the heeler tosses his loop before the header has changed the direction of the steer and has the animal moving forward, it's called a "crossfire" and it results in disqualification.

The clock is stopped when the slack has been taken out of both ropes and the contestants are facing each other.

Similar to tie down roping, success depends greatly on the teamwork of the contestant and her horse. The difference is that the breakaway ropers do not rope hard and fast. The tail end of the rope is tied with string to the saddle horn, the loop of the rope must pass over the head of the calf, come tight to the calf and break the rope away from the contestants saddle horn.

Once the rope breaks away the judge drops his flag and a time is given. As in all timed events a 10 second penalty is added if the contestant breaks the barrier at the beginning of the run. 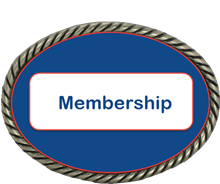 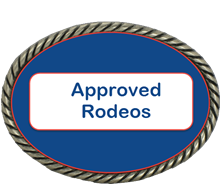 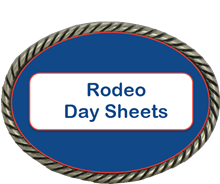 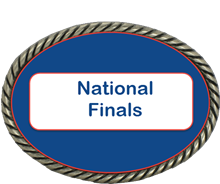 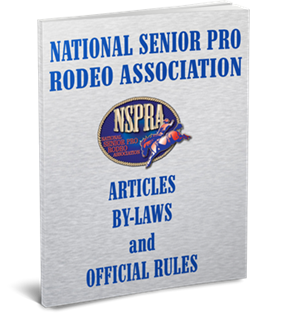